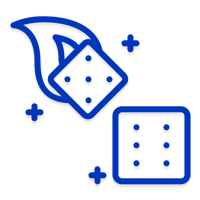 The hand is not pressing dice, but a gaming mouse/tablet/smartphone. In addition, the combination of numbers now no longer depends on throwing power, angle of incidence, and other physical and geometric characteristics. The machine selects the combinations. However, the rules of the dice game remain the same: you must roll the dice to get the largest number. Interestingly, it is almost always necessary to roll in pairs or with a whole team of players.

Crap is a game of dice played by betting on the outcome of rolling two dice. To play a crap game in an online casino, the shooter starts with a come-out roll. A player can place a pass line bet on the shooter making a natural win of the come-out roll by getting an outcome of 7 or 11, or by scoring a point.

A point is scored when the shooter makes a reroll of the dice after getting a 4, 5, 6, 8, 9, or 10 as the outcome of the come-out roll, and the reroll has the same combination as the first. However, a don’t pass line bet is a bet placed on the shooter losing the game by getting a 2 or 3. If the result is 12, it is called a push.

The Come / Don’t come bet could also be placed. It is similar to the Pass line / Don’t pass line bet, the only difference being the bet is made only after the point of the come-out roll is established.

Other fun online dice games are the Hazard, Chuck a Luck, Klondike, Sic bo, Scratch, and Banka Fransesca. The trick to winning many of your games is understanding dice possibilities.

The number of dice used to play a game would make you better informed on numbers with higher possibilities of becoming outcomes. Even at that, dice is a game based solely on luck.